I was assured by several Home Secretary's and Home Office ministers that should Oldfield commit another crime with a blade he would be lifed off, so why is his liberty still being given when Crown Court Judges are deeming him to be Dangerous?

I was told in a letter dated 04 June 2001 (one year to the day my brother died,)  By Lord Bassam on behalf of Charles Clarke the then Home Secretary﻿

"The Crime Sentences Act 1997 introduced provisions requiring that those convicted of a second serious violent or sexual offence should receive an automatic life sentence, and be kept in prison for as long as it is considered that they would pose a serious risk to the public if released on licence.  The offences included in this provision themselves carry a maximum penalty of life imprisonment.  The likely reason why Mr Oldfield was not given an automatic life sentence is that any previous offences that he was convicted of was not a qualifying offence for the purpose of this section."﻿

So my argument now is - Oldfield has twice since killing my brother been convicted of using a blade and carrying one while on licence, the Judge at Leeds Crown Court deemed him as dangerous, why has he still not received a life sentence?  Does he really have to kill again before that will be classed as a serious enough offence?

If you need advise or wish to chat to someone here are a few links. 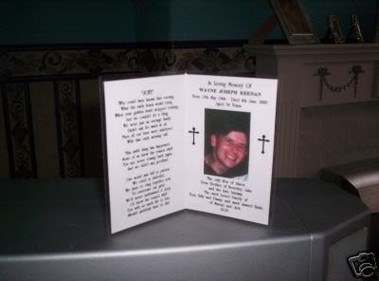 Too much loved to ever be forgotten

SAMM support after murder manslaughter Beraved, or people wishing to find out more information on how to support the traumatically bereaved should phone the Hotline 0845 872 3440

Your MP can get information from the police, home office, you can let him know your concerns and ask him to find out answers, he/she is there to help.  To contact your member of parliament go to this website and enter your postcode, http://findyourmp.parliament.uk/﻿

Write to them, go see them, ask for their help.

To Contact me please email me Beverley Keenan at luckybugbev@sky.com